With over 20 years’ experience as a corporate and commercial lawyer, spent both in the North West and prior to that in the City of London, Peter Allen has a strong reputation in the Manchester mid-market deal space and particularly for providing pragmatic and hands-on guidance to owners and managers of businesses to help them through complex transactions including fundraising's, acquisitions, disposals and joint ventures (domestically and internationally). He has a particular focus on the medical devices and food and beverage industries, having spent a number of years heading up the UK Food and Beverage sector group at international firm DWF. He joins from Manchester law firm Kuits.

As Partner in Browne Jacobson’s corporate team, Peter will work in a well-established team with solicitor Ryan Brown to provide full service corporate and commercial advisory services, with a focuson the North West market.

Ryan joined the firm from Kuits in May 2018, having worked closely with Peter there for a number years. Ryan most recently led on the establishment of a new ABS legal service practice between a number of former Kuits partners and international accounting practice ETL and their MBI of Manchester law firm Glaisyers which was Insider North West’s ‘deal of the month’ for December. 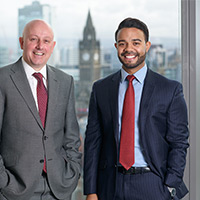 Other high profile transactions Ryan has acted on include advising Palatine Private Equity on its secondary buyout of Derbyshire based CET UK, the shareholderson the sale of Manthorpe Building Products Holdings Limited to Polypipe Group plc, NorthEdge Capital on its investment in facilities management company Orbis Protect and LDC on the secondary management buyout of Neilson Active Holidays.

The appointments continue the strong growth across Browne Jacobson’s North West team, which has seen headcount grow by 38 per cent in the last 12 months. Since the Manchester office’s move to No.1 Spinningfields, the firm has made a series of significant hires to its North West team, including: head of banking Jonathan Edwards; regulatory Partner Helen Simm; corporate Partner and healthcare specialist, Christian Dingwall; and Michael Mousdale, Partner in public procurement, local government and administrative and public law.

Amanda Callaghan, health Partner and head of the firm’s Manchester office, said: “Last year we saw strong growth across our service lines within the North West, and it’s fantastic that we continue to attract exceptional talent to our Manchester office.

“Peter’s arrival is the latest in a line of significant lateral hires to our Manchester office, which underlines our commitment to establish the firm as a legal powerhouse in the North West.”

Richard Cox, corporate Partner, said: “Peter has an exceptional reputation in his field, both in the North West and across the UK. He’s an expert in advising local businesses on complex cross-border tie-ups and major projects overseas, so we are especially pleased to welcome him to the team.

“We have ambitious plans to grow our corporate offering in the North West, which we hope will mirror the strength of our teams in the Midlands, and Peter’s extensive skills will greatly bolster the team’s capabilities.”

Peter Allen said: “This is a really exciting opportunity to join a firm that has one of the country’s most active corporate transaction teams across its network of offices. It is a great opportunity for Ryan and I to establish a premier North West based transactional practice, leveraging off an established national transactional platform and supported by brilliant fellow lawyers across the country and throughout our international network. Browne Jacobson has ambitious plans and a strategy to grow the firm’s North West offering and I look forward to growing and steering the North West corporate team as it provides trusted advice and support to local businesses and their owners, investors and managers.”

Employee who refused to wear a face mask fairly dismissed

New toolkit to support safer recruitment in the care sector

Green Leases for the NHS

Systemic Event Risks: the need for a customer-centric approach to policy drafting

The rising number of cyber-attacks

The continued threat of piracy in Southeast Asian waters

(Another) case on the importance of clear drafting

Menopause and the workplace

Shared Insights: Looking ahead to 2023 – what Health and Care employers need to know

Government introduces new “anti-striking laws” to be discussed in Parliament

Driving positive change through investment: a corporate associate advising in the energy sector

Biodiversity Net Gain: positive for nature and an opportunity for landowners

NSIA: the thorn in the side of M&A?