In March 2019, the Ministry of Justice launched a formal consultation (which came to an end on 6 June 2019) aimed at extending the use of fixed recoverable costs in civil claims.

This article is taken from June's public matters newsletter. Click here to view more articles from this issue.

In March 2019, the Ministry of Justice launched a formal consultation (which came to an end on 6 June 2019) aimed at extending the use of fixed recoverable costs in civil claims.

During the course of civil litigation, it is generally the case that the winning party recovers their costs from the party that loses. Fixed recoverable costs prescribe the amount of damages that can be claimed back from a losing party in civil litigation. They are also a way of controlling a party’s legal costs by giving certainty in advance of the proceedings being issued as to the maximum amount they have to pay if unsuccessful. An aim of fixed recoverable costs is to ensure that the ‘costs of the case’ are proportionate to the sum in issue.

The point of the 2019 consultation is that the Government intends to take forward Lord Justice Jackson's (‘Jackson’) recommendations in his report (published on 31 July 2017) on extending fixed recoverable costs. The recommendations in the report extend the scope of fixed recoverable costs across the fast track to claims valued up to £100,000. The reforms proposed in the consultation could be implemented as early as April 2020.

This article will: (1) highlight the recommendations made by Jackson; (2) provide an overview of the Government’s proposals under the consultation; and (3) provide an insight of how it applies to the public sector.

The aims of the 2017 Jackson report

The main basis of Jackson’s 2017 report was to recommend extending fixed costs. Fixed recoverable costs are already in place for most fast track personal injury, road traffic accident and public liability cases. The aim of this recommendation would be to extend the areas in which costs are transparently controlled in litigation.

Another main recommendation was for an entirely new track to be created in the litigation process. This would be called the ‘intermediate track’. If this reform was implemented, this would cause a big change to the current litigation system. At present, we have three tracks for civil claims to fall into. These tracks are essentially for court management purposes so that cases (varying in value and complexity) can be considered appropriately. These include:

However, as far as the consultation goes, the Government has rejected this new track. Instead, the Government intends to expand the fast track to include ‘intermediate cases’ due to the costs and complexity that would be involved in implementing a completely new track.

The Ministry of Justice consultation

Through the consultation, the Government is seeking views on three specific areas which it intends on implementing, including:

As mentioned earlier, Jackson recommended extending fixed recoverable costs to all other cases in the fast track (not just personal injury, road traffic accident or public liability cases). Jackson’s report sets out a grid with four bands of complexity of cases incorporating existing fixed recoverable costs regimes for fast track cases. The grid details: (1) the level of complexity (including what types of claims fall into what band); and (2) the level of fixed costs recoverable across each stage of the litigation (including pre-issue of a claim all of the way to post- and pre-trial). These costs are essentially your lawyer’s fees in bringing /defending a claim on your behalf. A copy of the grid (taken from the consultation) is at attached at Appendix 1 below.

It is clear from the grid that the further ‘down the line’ you are in the litigation the more costs you will recover if successful. The grid attempts to put everything in one place so that you can be certain what stage of the proceedings you are in and what costs you would be able to recover at that particular stage of the claim. Therefore, the grid aims to provide a snapshot of what you should expect to recover if successful in litigation (at any time). The Government has proposed to apply the fixed recoverable costs table across the fast track in the consultation.

Also, although the Government has rejected the creation of the intermediate track, it intends to expand the fast track to include the intermediate cases (claims with a value of less than £100,000). These cases would be allocated by the court to an expanded fast track and would be subject to fixed recoverable costs and the above costs grid. This proposal does not apply to High Court matters. Therefore, under the consultation many more claims would be subject to fixed recoverable costs.

What does this mean for public bodies and local authorities?

Without doubt, the reforms are likely to be a useful tool for you when considering whether to settle claims and at what stage you should potentially settle them (based on a commercial and costs perspective). The reforms could also potentially help limit the spend which you will incur in litigated claims with a value of up to £100,000. However, if fixed recoverable costs are implemented, this does not necessarily mean that you will not incur costs above what are fixed. Fixed recoverable costs will simply fix the amount which you will potentially recover. Therefore, there could be a shortfall in the costs recovered as opposed to the costs actually incurred in the proceedings. This may well impact any decision on whether to instigate proceedings or not, due to this risk of not recovering all of your costs.

If the proposals are implemented, more consideration should be given as to whether it is actually worthwhile in issuing/defending certain claims together with the tactics to be employed (obviously taking into account the value). This is because the risk of the costs which you could potentially be ordered to pay out could outweigh the amount claimed and the amount actually paid in legal fees. Although it will be clear from the outset what you could potentially recover, it will not be clear what costs you are likely to incur.

There is a very clear message from the reforms that early resolution (as always) is key to save time and costs in litigation. Extending fixed recoverable costs appears to be an important attempt of controlling the costs of civil litigation. What the fixed recoverable costs cannot confirm is the likely costs which you will actually incur during the course of litigation. What we could be certain on would be the fixed costs which you will recover/ have to pay out if the reforms are implemented. Even then, it is likely the judges will have their own discretion as to how it is implemented and the costs which will be awarded in litigation.

It is clear that fixed costs do give certainty and (to a certain extent) aim to control bad behaviour which can arise in litigation. The reforms (if implemented) could result in earlier resolution of disputes (saving time and costs for the parties). Only time will tell as to whether any reforms are actually implemented. It will then take further time to actually determine the impact of such reforms. 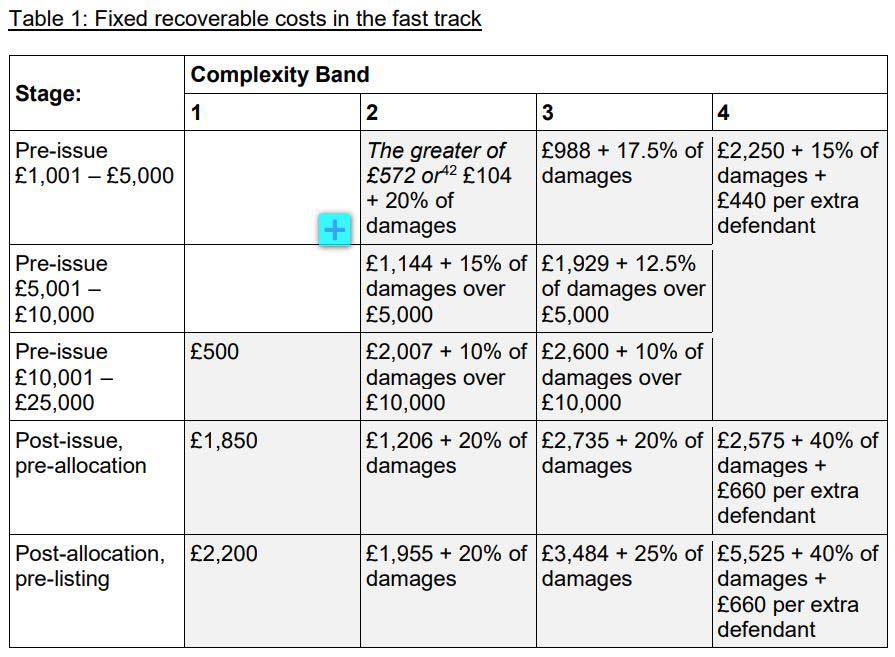 Green Leases for the NHS

Systemic Event Risks: the need for a customer-centric approach to policy drafting

The rising number of cyber-attacks

The continued threat of piracy in Southeast Asian waters

(Another) case on the importance of clear drafting

What are freeports and what benefits could they offer?

The Subsidy Control Act 2022. Putting the new regime into practice

Litigation in 2023 – Reforms on the horizon

Is over centralisation hindering economic growth?

Protecting children and their data in the online environment

(Another) case on insurers’ duty to defend