As you probably know by now, the acronym 'ESG' stands for environmental, social and governance. Although the investment community initially coined the term, it has grown into a larger concept that can be applied more broadly to any business or practice.

Jeniz White is an associate at Browne Jacobson specialising in financial services and an Equality Diversity & Inclusion (EDI) consultant. In this article, Jeniz gives a beginner's introduction to ESG and what, in her perspective, is needed to become an ESG changemaker.

As you probably know by now, the acronym 'ESG' stands for environmental, social and governance. Although the investment community initially coined the term, it has grown into a larger concept that can be applied more broadly to any business or practice.

Individuals wanting to invest in funds or businesses that they consider to be ethical is not a new practice. There is, for instance, evidence in many key Abrahamic religious texts of teachings to influence commercial activity by reference to moral or ethical considerations or requirements. Such approaches often involved reducing the exploitation of fellow humans.

Skipping forward a few years (!) to the twentieth century, it is common practice for investors to refuse to invest in products like tobacco, arms, nuclear weapons, alcohol and gambling companies. In line with their religious origins, these investments are sometimes referred to as 'sin stocks'.

During the twentieth century, the use of the term 'social consciousness' has become prevalent. It, and phrases like it, have been deployed for different social and political purposes, and in some cases, they have been co-opted and are now widely used as pejoratives (e.g. 'woke').

However, the vocabulary of social consciousness has undoubtedly been deployed by multiple bodies as a 'force for good'.

'Consciousness' is a concept we're all familiar with – it is the state of being aware of and responsive to the things around us.

'Social' in this context refers to an awareness of the forms of community or aggregation in which individuals exist.

As such, social consciousness requires going beyond your feelings or the personal consequences of a situation, and instead, developing an awareness of the welfare of other individuals in society. It also requires finding a 'collective' way to solve a problem. It involves attempting to question, and develop an awareness of, the structural causes (e.g. the economic, political or philosophical foundations) of an issue, and wanting to pursue a solution that addresses those causes.

In short, its foundation lies in kindness. It is the ability to look beyond yourself, those closest to you or those that look like you. It is the ability and willingness to be concerned with and take responsibility for others. It is recognising and respecting their emotions, expressing empathy, compassion and understanding.

However, recognition and respect need practical manifestation. Without action, consciousness is merely theory. As a result, consciousness also requires actively participating in the development of society and taking ownership over its future by finding solutions to inequality that involve everyone. This requires businesses and governments to be at the forefront of change instead of placing the responsibility solely on the individuals who immediately face the symptoms of the structural causes.

Some of the general principles can be summarised as follows:

More detailed articulations can be found at, for instance, THE 17 GOALS | Sustainable Development (un.org).

The acronym ESG was originally developed in the investment community. It refers to a set of criteria or standards that can apply to a company to assess;

ESG factors are typically used by socially conscious investors who seek to invest in a company that aligns with their values. This is sometimes referred to as 'socially responsible investing', i.e. investments that are considered ethical because of the nature of the business the company conducts or where the company has good 'social value'.

Many firms, funds, and other investments advertise a specialist focus on environmentally or socially responsible investing. According to Morningstar, in the first quarter of 2021, inflows into European “sustainable” funds are reported as totalling many billions of euros.  While there are – or appear to be - a range of financial products and services that have been created to ensure better ESG outcomes, many investors, analysts, regulators and other observers have material concerns that the actual composition and performance of certain products do not live up to the stated (or implied) intentions for the products. This mismatch is called 'greenwashing'. The UN, the 'Conference of Parties' and Net-Zero.

At the United Nations climate change conference (COP) in 2015, each country in attendance committed to working together to limit global warming to less than 2 degrees below pre-Western Europe /Northern Atlantic economies' industrialisation levels (see Defining 'pre-industrial' | Climate Lab Book), with the aim of reaching 1.5 degrees below. One of COP's missions is to mobilise finance to help deliver this goal. This involves ensuring that developed countries dedicate $100 billion every year in climate finance to support developing countries.

The UN predicts that $ trillions in private finance will be needed to get us to 'net-zero'. This is where the amount of greenhouse gasses going into the atmosphere are balanced by the removal of them from the atmosphere. To achieve this, they suggest that every financial decision needs to take climate into account, including:

However, reaching net zero tackles only one part or 'dimension' of ESG. It is our belief, and common sense would suggest, that to truly serve the interests of global society, a much wider set of goals are required. For more on this subject, keep an eye out for our upcoming article titled 'Two’s company, thre-ESG – why ESG must be considered in unison'. In the meantime, the matrix below highlights some of the key sub-categories or strands of ESG. 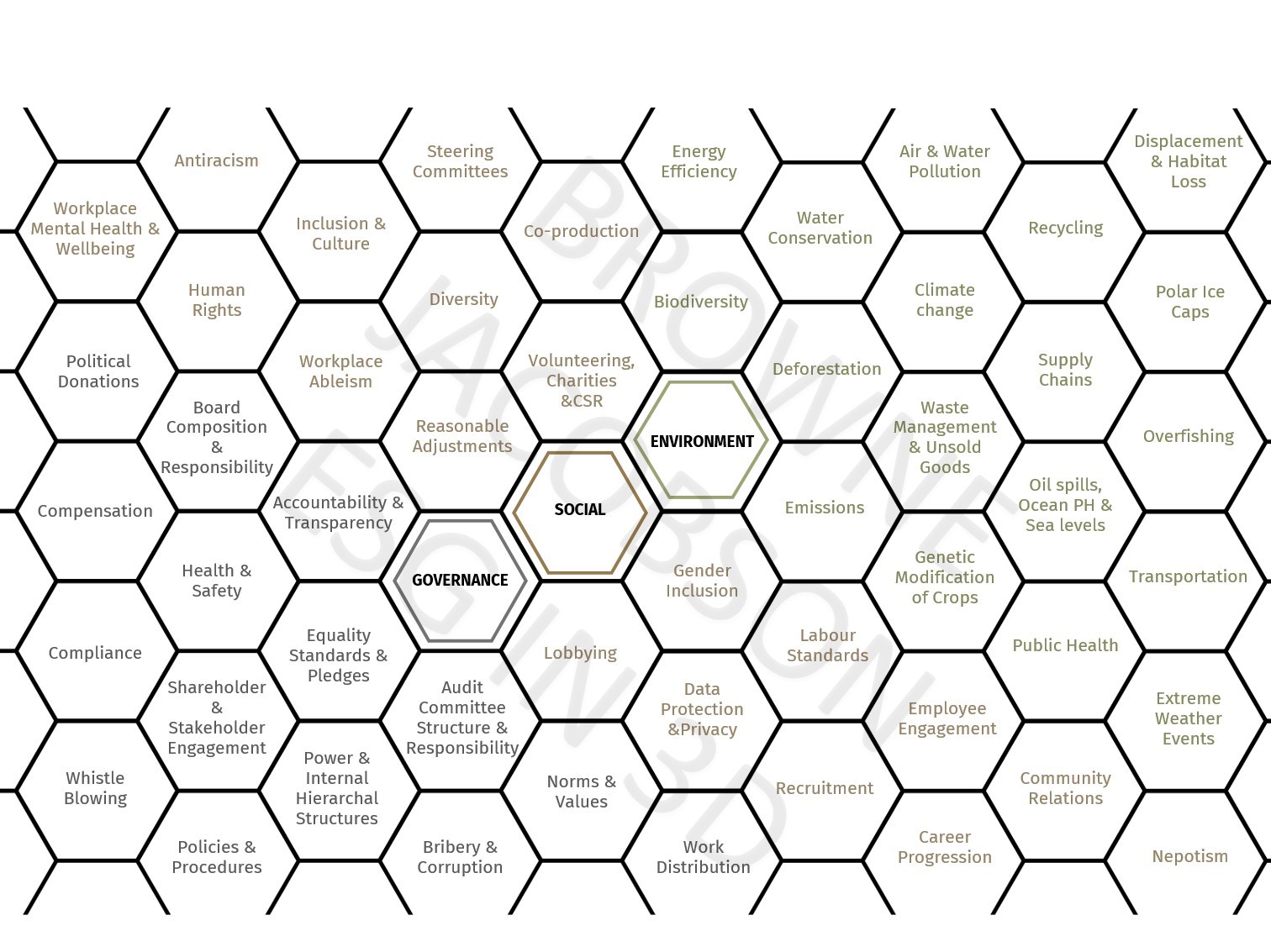 Driving positive change through investment: a corporate associate advising in the energy sector

Biodiversity Net Gain: positive for nature and an opportunity for landowners

Automotive webinar - EV charging points: contractual and liability issues to be aware of

COP15: The most important unknown summit?

Code of Conduct for ESG data and ratings providers

All the pieces of the conduct puzzle: Governance, culture, D&I, innovation

‘Decentralised and autonomous’ – evolution or misunderstanding of unincorporated association law?

The outcome of the Employment Tribunal claim brought by Gulnaz Raja against Starling Bank Limited (1) (Starling), and Matthew Newman (2) was reported last month.

The war on plastic is being taken to a new level, and businesses that don’t consider sourcing recycled packaging materials could face costly implications.

Is this the end for free returns?

Earlier in the year a number of fashion retailers, boldly announced the introduction of a charging fee for returning any product purchased via their online store. Yet, despite this commercial, and perhaps somewhat controversial decision, at least one major fashion giant that adopted this approach has recorded ‘historic highs’ in its September profits. Browne Jacobson partner, Cat Driscoll who heads up the firm’s commercial team in Manchester and is also head of its Fashion & Beauty sector discusses whether this change has put the average consumer off and whether the days of free returns are long gone.

Logistics company Eddie Stobart has been fined £133,000, after a series of failures which took place whilst excavation work was carried out, exposing its staff to asbestos.

This article is the second in a series to help firms take a practical approach to complying with the ‘cross-cutting rules’ within the new ‘Consumer Duty’ (CD) framework. The article summarises what it seems the Financial Conduct Authority (FCA) is seeking to achieve from the applicable rules (section 2 below) and potential complications arising from legal considerations (section 3).

Claims arising from interest-only mortgages have been farmed in volume. Many such claims to date have sought to drive a narrative that interest-only mortgages are an inherently toxic product and brokers were negligent simply for suggesting them. Taylor is a helpful recalibration, focussing instead on what the monies raised by the mortgage product were being used for and whether the client understood the inherent risks.

An engineering company in Tyne and Wear was fined £20,000 after a worker fractured his pelvis and suffered internal injuries after falling through a petrol station forecourt canopy, whilst he was replacing the guttering.

The Digital Services Act (the “DSA”) has today (27 October) been given the go-ahead by the EU Council and will enter into force by early 2024.

Luxury brands and sustainability – The challenges and solutions

The fashion industry has a mountain to climb when it comes to sustainability. More than 8% of greenhouse gas emissions come from the apparel and footwear industries, and approaching three-fifths of all clothing ends up in incinerators or landfill within a year of being made.

Created at the end of the Brexit transition period, Retained EU Law is a category of domestic law that consists of EU-derived legislation retained in our domestic legal framework by the European Union (Withdrawal) Act 2018. This was never intended to be a permanent arrangement as parliament promised to deal with retained EU law through the Retained EU Law (Revocation and Reform) Bill (the “Bill”).

HSE inspection of asbestos in schools

The Health and Safety Executive (HSE) have announced they will be carrying out a programme of inspections to primary and secondary school establishments from September 2022. The inspections will assess how schools are managing the risks from asbestos and meeting the Duty to Manage requirements, set out in Regulation 4 of the Control of Asbestos Regulations 2012.

Enforced ESG sustainability: prepare for the planned and the possible

This article is the first in a series aimed to help firms get to grips on a practical basis with the ‘cross-cutting rules’ within the new ‘Consumer Duty’ framework.

The Government has announced a change to the categorisation of “small” businesses to reduce the amount of regulatory compliance (or “red tape”) required. Currently, SMEs (those with fewer than 250 employees) are exempt from certain regulations – such as the obligation to comply with gender pay reporting. With effect from 3 October, these exemptions will be widened to apply to businesses with fewer than 500 employees.